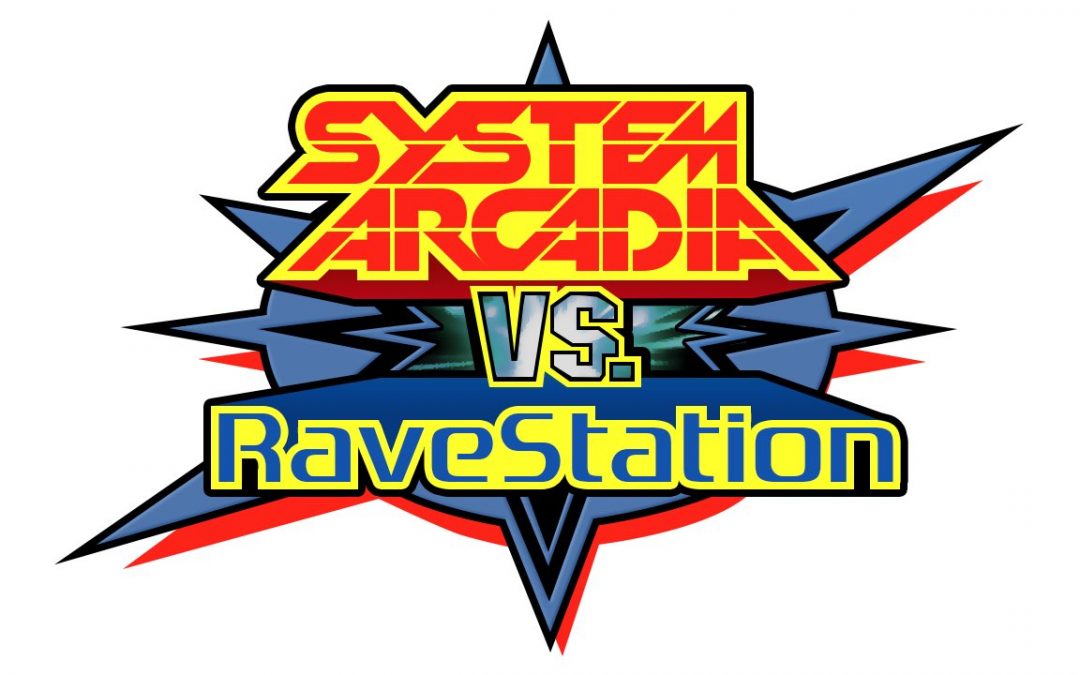 Hello everyone! Or, as our partners at RaveStation Records would say: Hello gamers! We are excited to formally announce our first ever collaboration event with another label. Coming from Detroit, MI, Ravestation Records is a fast-growing company busy with their own web events and album releases on Bandcamp. We had the honor of working with them before; their leaders, tweak and DJ School Pizza collaborated on a set for Shakunetsu Underground last October. These guys are not only great performers and promoters, but they are long-time friends of ours in the Bemani scene. They share our same passion for the JCore and netlabel scenes; it was only a matter of time before we would celebrate the genres together.

This will be a two-night event on September 24th and 25th. Each night begins at approximately 7 P.M. EDT with each company showcasing their own lineup on their own Twitch channels. Make sure to follow both System Arcadia‘s and RaveStation Records‘ channels to get notifications for when we go live. There will also be a week of rebroadcasts starting on September 20th showing some of the favorite sets from both company’s past webshows.

Next, we are happy to announce that our next show supports the charity Direct Relief, specifically for the COVID-19 response. As the Delta variant of COVID-19 continues to the spread across the United States, it’s clear that we must continue to support our healthcare workers at the frontlines. 100% of proceeds will go to this charity.

In the near future, we will post the entire lineup from both companies. For now, we wish to announce our two headliners for Friday night, September 24th.

John Robinson, who will be doing a special 60-minute set featuring Juliana’s Tokyo!

John has sold millions of albums in Japan and Asia, both as a recording artist and a DJ/Producer/Mixer. He has worked with a diverse range of artists on an equally diverse range of projects. Trance icons Armin van Buuren and Tiesto have appeared as guests at his After Hours parties; he also has worked on projects with major artists such as Julio Iglesias, Lionel Richie, MC Hammer, and more.

In Japan, John was initially known as the main DJ of the legendary Juliana’s Tokyo, and went on to have a successful career as a recording artist with 7 solo albums under his belt. He toured extensively, twice performed at the Tokyo Dome and had his own shows on both TV & radio.

The pandemic forced a major reboot of his DJ strategy. John quickly transitioned to performing gigs online. To date, there have been more than 280 online gigs, including more than 230 episodes of Sanctuary. This show has developed into a community that supports a number of worthy causes in the Philippines. So far, almost 8 million pesos (Approximately $401,804.00 USD) have been distributed as aid to those affected by the pandemic, typhoon victims, victims of abuse, children with special needs, among other causes.

Jerod Collins, or “The8BitDrummer” as he is known online, has been drumming and entertaining for 13 years now. Starting with his local church band, he now specializes in improvisational drumming and performance. He used this talent to start a Twitch.tv channel where he entertains thousands of people every day, taking song suggestions as he goes. His channel is a beacon of love, laughs and giving with monthly charity outreaches that have raised hundreds of thousands of dollars for different causes. He is just a guy that loves to make people laugh and hopes to continue to entertain for years to come!

Stay tuned for a future posting showing the lineup for both nights as well as the complete schedule for the weekend. We hope you are as excited as we are for this amazing weekend of electronic music. We will leave you with this hilarious trailer video made by the RaveStation crew announcing our event. See you soon!