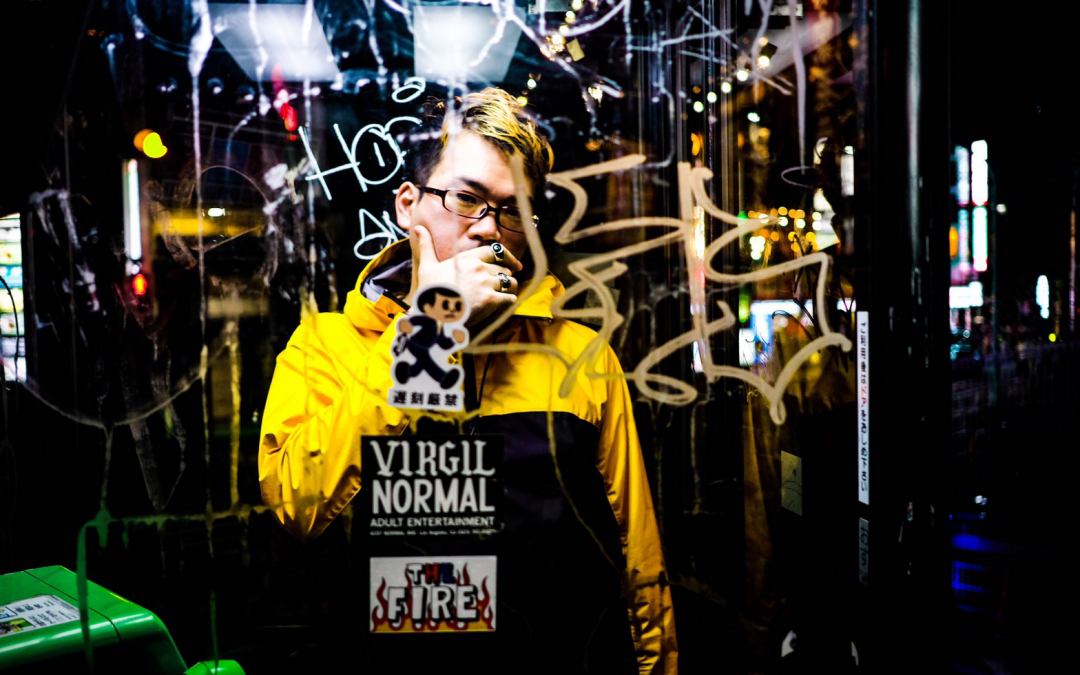 In preparation for the second remote System Arcadia show, Shakunetsu UNDERGROUND, we got the chance to talk to Hommarju, a Japanese music producer who makes songs under several music genres. He started off by making songs for the EXIT TUNES label and quickly expanded his contribution to many doujin circles such as HARDCORE TANO*C and SKETCH UP! Recordings, which made him quite popular. Hommarju is an all around composer, who usually oscillates between happy and UK Hardcore, hardstyle, breakcore, and occasionally frenchcore and speedcore tracks.

Q: You describe your sound as a fusion of rock and electronic genres. Tell us about that.

I realized one day that my music wasn’t “traditional” club music that many people think of. My roots are a combination of J-POP, J-ROCK, a cappella, music, etc., with club music on top of that. Recently, I decided to categorize this as J-RAVE. So, I’m making RAVE MUSIC.

Q: Tell us about your personal label work.

I created my label “THE NO1ZE” for the purpose of releasing my own music. For each project, I bring together a small but elite team. These designers and web creators are able to embody and express my vision for whatever I want to release. Although these releases are somewhat slow-paced, they’re all completely managed and created by myself.

Q: Tell us about your work with Gackt and BOOM BOOM SATELLITES.

For Gackt, I arranged the song UNCONTROL Ecstasy Flurry edition. Since it has an original version (Uncontrol, 2001) it’s considered a remix. Gackt himself liked my remix, and the song was unveiled as the encore of one of his live concerts…which I got to see live at the venue! ()

[For the other song,] I entered into a BOOM BOOM SATELLITES remix contest, and won both a special runner-up and an honorable mention award. One of those songs, Disconnected -Hommarju Remix- was officially released since they enjoyed it: https://www.nicovideo.jp/watch/sm20486704.

Q: Tell us about your relationship with HARDCORE TANO*C.

I’ve collaborated with the TANOC team many times. I have also been to their office to hang out and have fun! They’re a very important group and members of the music community.

Q: How did you start making songs for BEMANI?

I was originally a BEMANI player, so it was pretty much a natural step for me to have a dream of “making BEMANI songs.” After twists and turns, hops and hurdles, and when I was even considering giving up creating songs, my song Phoenix was finally released in beatmania IIDX. One of the reasons why I can keep on working now is because of BEMANI.

Q: What is the story behind HYENA?

Back then, a cross-game event called “Nettou! BEMANI Stadium” was being held, and it was planned that I’d release a song for that event. Although I remember I set a pretty high hurdle for myself: Creating a song that could be enjoyed on, and flow well with all games…I overcame it.

“IIDX songs are too one-sided and uninteresting!” was something I thought one day. [Beat Juggling Mix] was born from combining that feeling, and elaborating upon the [DJ BATTLE] idea I’d been thinking about for many years. I didn’t want to accept the trend of “It’s interesting if there are many different sounds!” that’s relatively typical of most rhythm games. Instead, I thought interesting tracks are ones that go against that flow. And since my style has a smaller number of notes/sounds, it became a song that fused all of the above.

Q: Tell us about Verflucht.

I was asked to write a high-difficulty song. I remember unleashing all my pent-up anger into this song.

Q: Tell us about Flashes.

Flashes was another song where I got asked to create it with high-difficulty sounds. Since it was decided that the artist name would not be Hommarju I wrote the song it so that you couldn’t tell who the composer was. Instead, I wanted people to focus on and enjoy listening to the song itself. Some players judge a song by the artist name, but I think that’s wrong. Why? Because you can’t hear a song with your eyes. But for some reason, some players try to judge the song by their eyes (the composer name). I wanted to go against this.

Q: Tell us about GENE.

When I was making this song, I was really interested in graffiti art. I especially liked Mr. Brainwash’s work. He used the same base style for his works and created many branched-out designs with different colors. I got the idea from here. In graffiti culture, there’s a strict rule of, “Only more skilled artists can paint over existing works.” In the same vein, I overwrote the exiting version of my base song [with GENE]. This also included mixing in memories of the IIDX HAPPY SKY songs that I played the most into the final song. But even with that, GENE is not just a medley. It’s my original song. GENE’s most exciting melody is my original, which isn’t quoted from any existing song.

There’s a movie called “GATTACA” (1997) that I used as the original story when making GENE. The movie’s main character Vincent Freeman was judged to have “inferior” DNA but he goes against both society and his own DNA to seize his dream. “Vincent” is taken from this protagonist’s name. GATTACA’s title itself is based on the letters G, A, T, and C, which stand for guanine, adenine, thymine, and cytosine, the four base elements of DNA. I wanted to incorporate the “genetics” of my own BEMANI history (along with playing HAPPY SKY) into this song. IIDX’s difficulty levels are named Normal, Hyper, and Another. So, in addition to the base DNA letters of G A T A I added and rearranged the N H A from IIDX’s difficulty names to form “GANATCH.” The name formed by combining both of the above parts is “VINCENT GANATCH.”

Q: Akira Complex said in an interview that you and them have a very interesting collaborative relationship, and that you like to chop up the sounds they give to you. Is that accurate?

Akira Complex is a genius. Their passion for music is very hot, and very pure. They recreate the demo songs I provide so that it sounds completely different. But, that’s good! Creators like them who have overflowing talent can benefit creators as well as the music scene as a whole. They are one of my very wonderful and dear friends.

Q: Do you play any BEMANI or other music games?

The impact of Coronavirus has caused me to be unable to play as much, but I still consider myself a player.

Q: How did you get into Lumines (mobile) [the Pac Man remix]?

Haha, you know about Lumines. I’m really happy to hear that. My good friend MK [Masakazu Kageyama] a.k.a. Shadw approached me and asked “Wanna do something together?” I listened to the original song, combining and completely reproducing them by ear, and finally remixed the song.

Q: Who are your favorite Western and Eastern* musicians?

The Western musicians I admire most are The Prodigy. Their style is intense, but built on a great sense of hospitality and compassion for their fans. My current goal is to officially remix their music. I have a lot of respect for Eminem because of his production style. He doesn’t leave the production to chance or do it “randomly.” He starts at a fixed time, takes a fixed break and finishes at a fixed time. I’ve recently started to adopt this constant production style. But it’s a shame that the English lyrics don’t rhyme well when translated into Japanese…so it can’t be enjoyed like its original form. Even so, his music is quite outstanding.

Q: How would you describe your performance style?

I try to embody The Prodigy’s performance style all by myself. Keith’s rampaging, Maxim’s fighting, and Liam’s carrying the music, audience, and group along coolly. This is where my style comes from.

Q: What’s with the megaphone that you have at every show?

The megaphone is my “icon”. But I don’t use it much anymore, since I have to modify it in order to connect to a mixer.

Q: You have a distinctive streetwear style on your album covers. How would you describe your personal fashion sense?

I love fashion. Women’s fashion in particular is full of my own tastes. But unfortunately, I never get to wear them. For men’s clothing, I prefer to wear casual shirts with a stand-out main color, or something monotone. I also like character-type designs featuring Splatoon or Snoopy. But I truly love the brand VALENTINO for both my private and streetwear. Last year, VALENTINO sold a HYENA t-shirt. It seems like a shirt they made just for me, right? (lol) When it comes to streetwear though, MISBHV is my favorite.

Q: What are your favorite foods?

My life’s textbook is JOKER. And my driving force is GATTACA. But the Batman Dark Knight trilogy is what gives me my creative energy. These are my essentials.

Q: Do you have anything you want to say to System Arcadia fans for the October show?

Japan and the rest of the world have shut down in various ways due to the effects of the Coronavirus. But even in this time, I’ll continue on with my music as I always have, keeping my style the same. If you’re feeling anxious or worried, let my hour of music be your energy. With my sound, it’ll be an endless and infinite rave.

We thank Hommarju for taking the time to interview with us. Make sure to follow us on Twitch for when we go live on October 17th at 8 P.M. EST! See you all there!