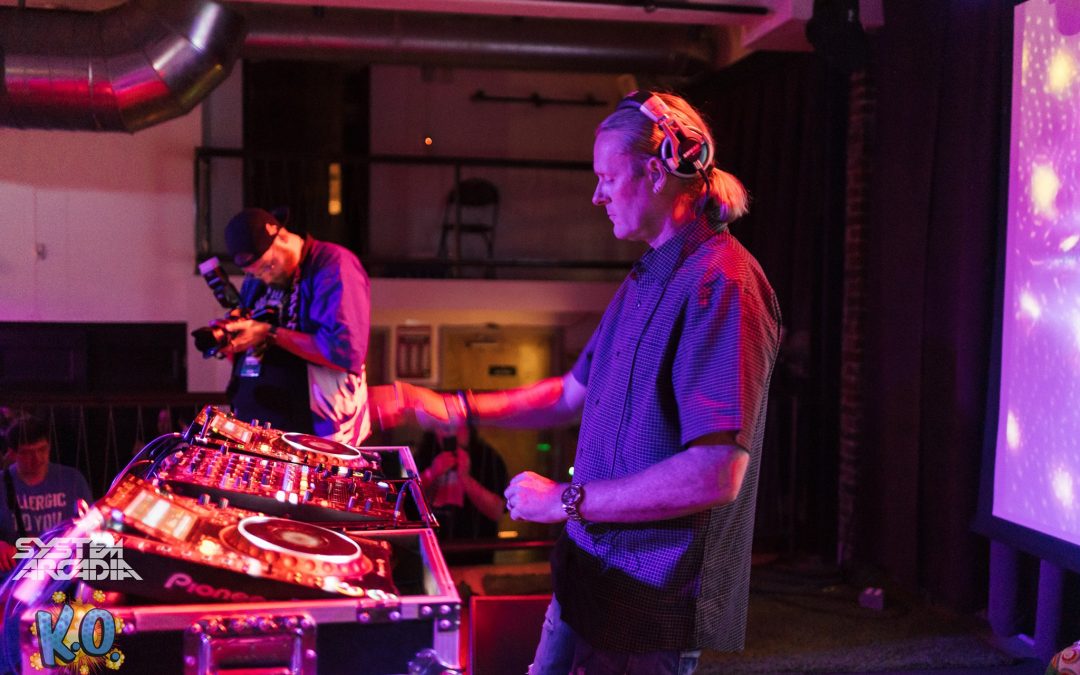 At the cusp of summer and fall, I was at the Sonia nightclub in Cambridge, MA. There, I found myself talking with Scott Brown, happy hardcore and bouncy techno legend. We spoke about how he started producing music, his favorite Commodore Amiga games, and his doppelganger, former Massachusetts Senator Scott Brown.

How did you first get into producing your own music and DJing?

Producing the music came first. My first release was in 1991. God, I’ve been making music [for that long]… again, old man.

I was listening to a lot of Detroit techno in the late 80s. I was like, “I wanna make this!” I had a little, like, Yamaha keyboard, this piece of shit keyboard. I was like, “how do I get these sounds?”

Actually, when I turned 18, I went to university to study physics. And instead of buying books, I bought sets of keyboards.

And when you start releasing stuff, especially under your own name, people just automatically think you’re a DJ. So I started getting bookings as a DJ. I couldn’t DJ for shit, I had to learn!

What sort of hardware and software did you use at first?

First thing I had was a Commodore Amiga [home computer]. There weren’t any trackers at first [music sequencing software]. I bought a little MIDI interface and used software called Dr. T’s [MIDI Sequencing Studio]. It was very, very old. It was actually more complicated than trackers.

We used to do live sets and I would take everything on stage. Once we started making some money, I managed to buy more synths, You know, samplers, drum machines. We couldn’t afford some things, but we didn’t mind, because I couldn’t afford a DAT [Digital Audio Tape] machine or a tape player. So we would take everything on stage. And literally what we had at home we’d take on stage and control from the Amiga. There’s some interesting stories, a lot of [computer] crashes.

The reason I used an Amiga was because I played a lot of games, obviously. For me, it was better than the Atari ST [game console of the era].

The demoscene was huge at the time, and it kind of fit into the electronic music scene a lot, right?

Quick note: the demoscene was an artform of the early 90s — teams of people would make audio-visual spectacles running on consumer hardware such as the Commodore Amiga and the ZX Spectrum. Many musicians contributing to the demoscene would go on to have professional careers in the game and music industry! It was an artform combining programming and audio-visual magic.

There was so much stuff at the time. The rave scene really kicked off in the UK in 1991. So we came to the right place at the right time. Lucky me.

Kickoff! I used to play Kickoff a lot, a football game.

You weren’t a Sensible Soccer fan?

Oh, Sensi. I played that a lot. When I think about it, I probably spent more hours on Kickoff, but Sensi, that kind of took over. Absolute classic.

There’s so many other games, but those were the ones I spent a lot of time on, you know, at three o’clock in the morning, being like “Ooooh, one more goal!”

What sort of equipment and VSTs do you use nowadays?

These days, it’s changed so much. It’s all computer-based — I use a Mac, I mean, you just connect the dots to this like big, 49 inch widescreen kind of [monitor]. It’s great, I can have so many windows, because a lot of guys like plasma screens or something, and I was like “I gotta get that.”

As far as VSTs, I’ve always used Cubase. When I did finally make the move over to something better [from the Amiga] about ’94, I bought a Mac Quadra.

I actually learned Cubase from [happy hardcore DJ] Paul Elstack from Holland. I went over his studio and went “Oh, I need to get this,” you know. And so it’s kind of progressed from there.

I’ve always been using Cubase. I’ve used Logic, Ableton Live, as well. But I just feel most comfortable with Cubase.

What’s the story behind your label Evolution Records?

It was during Q-Tex. So, basically, I was writing so much music that the label I was signed to with Q-Tex couldn’t cope with it. I kept giving them tapes and they were like “we can’t deal with it.”

So, I started fishing around and sent some tapes to three or four different labels. Some of them were good, some of them ripped me off, done me over. I lost money, I made some money.

I actually got contacted by the distributors for one of the labels, and they were like “why don’t you do it direct? We’ll do everything, cut out the other guy.” That’s kind of how I started making money directly. I wasn’t getting people sending me hand-written faxes saying that I wasn’t due any money when I knew that I sold 5,000 records.

That must have been ’93, ’94. I’ve been in motion for a while. I’m glad I called it “Evolution”, it was going to be called “Revolution”. But we’re talking 25 years on and the music’s changed so it’s quite appropriate.

How has the music changed, exactly?

A lot of the stuff now is trying to be more extreme, but back then, we were trying stuff and we found a benchmark of around 170-175 for UK hardcore. That was the sweet spot.

I talk to some of these younger guys [like JAKAZiD and Tanuki] and I’m like “shit, I need to up my game!”

Oh, back in the day, I was also listening to things like Depeche Mode and New Order.

Yeah, Blue Monday is one of my favorite tracks. The 12-inch [vinyl] is one of the biggest selling 12-inches ever. It’s a big disk, looks like a big floppy [disk]. I used to copy the drum patterns and the hi-hats!

You’ve performed all over the world — would you say that rave culture is similar or different across different countries?

It’s similar, you know. I could play a track here and it explodes. And I could play the same track in the UK or Australia or something and not much. But in Japan, they go crazy. They love everything. They’re just so up for it. I don’t know if it’s the alcohol, the water, I don’t know!

It’s all about respect. I think it’s the fact that you have come over [to perform]. For me it’s like “wow, I’m going to Japan” and for them it’s like “wow, you’ve come to our country”. They really appreciate that.

There’s slight differences — a track that you may never play, like a B-side, an obscure track, would be huge. They’d go “you need to play this track”. Like today, the Go Berzerk track.

Tell the story behind how “Go Berzerk” ended up in Beatmania.

So, did the Dancemania [Toshiba EMI CD series] release come before or after?

So I added a lot of bass sound, little riffs, and, you know, and [the Beatmania IIDX developers] kept sending it back, saying “make it harder, make it harder.”

When the [game] got released, it wasn’t even one of the hardest tracks! When you listen to the hard tracks [in Beatmania IIDX] I was like “I can’t believe it, this is impossible for you guys!”

Now, you have people who grew up playing the Beatmania games who make their own tracks and have their own labels now!

Yeah, and that’s how it works. I mean, I didn’t set out to make music. I went to uni to study physics. And I was going to do something along that road. But, the rave scene happened, and Q-Tex happened, and I started DJing. I took a year off of university; my mom wasn’t happy, but it was just the best thing I could have ever done.

We briefly talked about the rave scene of the early 90s.

For some context, the Criminal Justice Act of 1994 was a parliamentary act in the UK that was meant to restrict “outdoor gatherings,” specifically outdoor raves. It was formed following an event called the Castlemorton Common Fair in 1992, one of the most high profile and notorious outdoor raves of the era. The act specifically targeted music with “repetitive beats”, language that was criticized for being too vague.

The Prodigy [rave act of the 90s] were the first to speak out about [the CJA].

Yeah, that was surprising. One of those sobering moments. I met him a few times and he was always lively, a nice guy.

So many raves stopped [because of the new laws]. So, they started bending the rules so they could do other things.

Overall, the music wasn’t approved by everyone, but the kids loved it!

I loved it, as well. I’m [still] a raver. Well, getting a bit old myself, but you know.

Tell me about your work on the Bonkers! [rave] compilations.

I knew about Bonkers! since I had tracks licensed to it for years.

Bonkers! 7 or 8 was the first one I worked on. And it was like the scene was getting revived; the first [compilations] were in the 90s, and then the scene took a real dive towards 2000 when the labels went bust a few times.

Before that, it was unbelievable, I was in a lucky situation. I had a lot of popular tracks, you know, Elysium, stuff like that. It was good for me and the labels because I helped pay their bills.

One more question — tell me about the track “Rock You Softly” and the break in the middle with the soft female vocals.

That’s a sample. I heard it on MTV or something — I hunted it down. It was really hard, because the breakdown is a different BPM to the rest of the track. There was no way I could stretch it — it would sound funny.

So I made a completely different track and I decided on the breakdown for it, and it just worked. People still ask for the song. Even when you’re making new stuff, people want to hear the old stuff.

There’s a funny coincidence I wanted to mention — there’s an American politician named Scott Brown. A lot of people get confused!

Oh, yes. The first time I was in Boston, it must have been five, six years ago, for a Tight Crew [RI rave promotion] show. I was lying in bed, you know, jet lag, kind of half-asleep. I was opening up like hard beers and shit like that. And all of a sudden I hear, “I’m Scott Brown, and I endorse this message”. And I sat up and went, “What?! Is this something to do with me?”

So I went to the party and people there said “are you aware of Senator Scott Brown?” and I go, “Yeah, I saw this thing on TV”. So I go up to the microphone during the show and say “I’m Scott Brown and I approve this party”

What do you want to say to your fans in the US?

Let us come out and have fun because that’s what we’re gonna do. You know, just don’t overdo it. Be safe and just have fun. You know, that’s, that’s what the scene was born from. People just want to do something different.